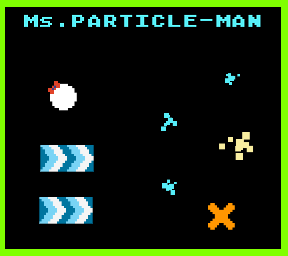 Ms. Particle-Man Ms. Particle-Man! Showing off all that Silverlight can! What's it like? Pretty good! Ms. Particle-Man! A fun little work from Picobots where the quest for the Higgs boson particle takes on the guise of a 1980s arcade game, Ms. Particle-Man is so aggressively science-geeky and displays such love for its inspirations, that nostalgia tripping is almost inevitable.

Ms. Particle-Man likes switching up its gameplay, so it's a good idea to play through the tutorial. Generally though, you move the Ms. with the [arrow] keys to collect sparking bits of energy. Going off one side of the screen will teleport you to the other. Avoid the flashing obstacles to stay alive, and build up momentum to make your way across the purple paralysis patches. Some levels feature gravity, and thus have more of a platform feel. During those, hit [spacebar] or [enter] to jump. Each set of levels features a final boss, where you must use an accelerator pads to collide with an elementary particle, all the while searching for that elusive Higgy B.

Ms. Particle-Man is one of the first works programmed in SilverLight to have the feel of a real game instead of an extended tech-demo. Depending on your opinion of flash, this is either a triumph or something that doesn't matter at all. Like they say, it doesn't matter what the talking dog has to say, it's the fact that he talks at all that's impressive. Of course, it helps that Ms. Particle-Man is a really enjoyable game. An inspired combination of Pac-Man, Secret Collect, and the entire avoidance genre, it has the hardcore challenge and cartoonish humor that would keep the quarters inserted for hours. Über-Sensitive controls, slippery platform corners, and a stingy distribution of lives mar the experience, but whenever the screen triumphantly fills with PARTICLE GET!, all is forgiven. Ms. Particle-Man works as both a game and a proof-of-concept for the platform, and when they meet, it's a happy land!

It's fun, but this game flat out needs a continue function. The levels are long enough that replaying from the start after getting pretty far is a hassle, and for me enough of a hassle to not want to play any more. Beyond that, however, it definitely has charm and style, and the slipperiness would easily be forgivable with a continuing function (preferably at the beginning of each collider).

With that said, the meaning of this game is pretty exciting, and it'll be interesting to see Flash, Silverlight and HTML5 competing in the browser games categories. It's nice to know there are many options out there for aspiring game developers!

Title of the game reminds me of the They Might Be Giants song. :3

All I get is an invitation to buy the full version on the App store ?

I tried on Chrone and Firefox... am I missing something ?

[It's a Silverlight (Microsoft) game. Click the "Plug-in" info link in the review header to get it. -Jay]

Slippery controls, precision avoidance levels, and a back to the start game over system? No thanks.

Continuing at the beginning of a collider would make this at least a worthwhile challenge.

Hi everyone. I'm the game developer. Thanks for the feedback. I thought about adding a continue system, but I also wanted the game to be purposefully hard. The reason for that is two-fold:

1) The original arcade games that this game is modeled after are ridiculously hard. I tracked down a bunch of classic arcade machines and played them in my "research", and I was surprised by how punishing they were. It's easy to lose a whole game in a matter of 30 seconds, and many of those games don't have a continue feature.

2) Obviously the game is inspired by the search for the Higgs boson, and anyone who's been following the story at CERN (and Fermilab and elsewhere) knows how difficult (if not impossible) that search has been. So the difficulty of the game is also intended to be a comment on that search.

Beyond that, I'm also just a big fan of "player skill" games, so I made a game that I would want to play. I carefully tuned the difficulty so that it's learnable and masterable, but certainly very challenging. My playtesters were able to beat the game after a couple hours of playing, which is exactly how I want it to be. Nonetheless, as the game has seen a wider audience, I'm beginning to realize maybe it's just too hard. Oh well. Maybe next game.

Those retro arcade games were that hard because they were intended to steal lots of quarters. Take away the capitalist motive and games like that are just plain sadistic.

Building off of what Tenzhi said, games based off of lives that start you over from the beginning are an outdated format. It's not a fun way to challenge the player - it's just frustrating. Forcing them to go through the entire game again, redoing challenges they already completed, isn't fun, and there are other ways to do it. There are plenty of games out there that manage to be quite challenging that don't resort to this system.

One example that springs to mind would be VVVVVV in which individual challenges can be brutally difficult, but the game is littered with checkpoints, putting the focus on overcoming a single section of gameplay rather than endurance survival. This system also allowed the game to mix it up occasionally, requiring you to avoid checkpoints to achieve goals.

Other games with a more level based format abandon the lives system as well and simply start you at the beginning of a level if you die. This allows individual levels to be potentially quite difficult. The Meatboy games, for instance, are difficult games that follow this format.

In this case, since the levels are so short, I think starting at the beginning of a collider would be a nice compromise. Since the lives are being restored at the end of a collider anyway, it's the same actual amount of challenge but without the frustration of having to go through a large amount of levels that were already completed.

Just a difference of opinion. The classic arcade machines of the 70s and 80s invented the gaming industry that we all love - they brought gaming to the masses - and I think people fell in love with those games because of their difficulty and awesomeness, not because they were hoodwinked by capitalist motives. The challenge made them fun, and mastering a game was a badge of honor.

Far more eloquent people than I have written volumes about this (Kill Screen magazine, Steven Kent's Ultimate History of Video Games, John Sellers' Arcade Fever); I can't really add to what they've already brilliantly said, so I'll leave it there. But you're definitely right that the industry has changed, and game design philosophy has changed. We just differ on whether that's a good thing. And that's totally fine! I appreciate everyone's thoughts and feedback. It's an interesting conversation.

I can respect that you have a philosophy you're sticking by here, but realize that you also have a product you're trying to get people to use. I quit playing the game because I'm just not that interested in playing the same levels over and over again, when there are plenty of new games that offer me new and varied experiences without the frustration.

I would strongly suggest that you listen to your critics rather than arguing with them. Your argument may be 'right', if such a thing exists in this context, but your rightness is irrelevant if no one wants to play your game.

I like the game, I enjoy the somewhat slippery controls and the degree of randomness. But when it takes me 5-10 minutes just to get to new content, I'm going to move on - I'm no longer 13 and can't spend all day on these things.