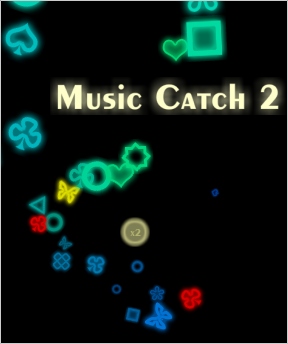 Music Catch 2 delivers everything you'd want from a sequel to Reflexive's surprise hit Music Catch, especially if what you want is more ways to collect thousands of shimmering doo-dads. Essentially this is the same game, with three more lovely piano tunes by composer Isaac Shepherd, and a few different choices for how the collectibles will bloom and fade away.

If you never played Music Catch (or even if you did), the game is simple. As the background music plays, a cavalcade of blue shapes and symbols will appear, loosely in time to the rhythm. Your goal is to collect as many of them as you can with the cursor. Special yellow shapes make your cursor grow (happy!), while red shapes make it shrink (sad!). The rare purple shape gives you temporary purple vacuuming power (super joy!). New to Music Catch 2 is the rainbow shape, which turns every on-screen shape to yellow, presumably because there is gold at the end of rainbows. Which I can vouch for, by the way; sometimes you have to dig.

Some of the new movement patterns make the game dramatically easier than others, but Music Catch was never about challenge anyway. It's just an easy way to relax, scooping up armfuls of trinkets and grooving to the mellows.

After a few plays, you'll unlock the ability to play any song of your choice as the background music, although you can't use your own music library directly. Your options are restricted to publicly accessible MP3s with their own URL, which you must type into the appropriate dialog box. Thankfully, the game remembers songs you've recently used, so you don't have to re-paste them.

Yeah, Music Catch 2! I just loved the 1, and the sequel is much, much better. Although, i will love the option to play songs from your HDD... But, overall, it's great. ^^

I have to say, the increase of music- or sound-based games lately is really cutting down on my ability to play games at work. Thank you, JiG, for externally imposing some measure of work ethic upon me. ;)

Only problem is I can't find URLs for songs to put in Music Catch. I want Metallica, dangit!

It's not working for me. As soon as I get to the song the sound goes wierd and no shapes come out.

I have Firefox and a fairly recent flash player (It may be the newest one). Also, it's just this game and not my computer or flash generally.

The best I can suggest for finding mp3s to use with the game is dogpile.com. Just click the music tab, search for a song, and hopefully someone somehwere has posted it online. It's worked for the last two songs I've searched for (Unforgettable by Nat King Cole and Float On by Modest Mouse) so I think you have a pretty good chance of success.

You can't even use your own music this time? I found the last game to be fairly mediocre (as a game anyways, it was kind of relaxing though) and not being able to pull your own music from your hard drive is kind of a deal breaker... sorry, Reflexive.

The limitation of not being able to select a file on your own hard drive is due to the Flash security model, which allows you to access network OR local files, but not both.

Since the game is being played over a network already, local file access is not permitted. Therefore, mp3 by URL only.

If you want to access your local files, check out the Music Catch downloadable game.

The best way to find MP3s on the net (a google hack, of course!
http://www.jimmyr.com/mp3_search.php

I am surprised with the somewhat negative reviews this game has gotten so far. In my opinion this should be one of the top rated games on here. The first music catch was a great game, relaxing and entertaining and this is an amazing improvement. The ability to select different patterns, shapes, and songs gives this game better replay value and all of the songs included are amazing. I would put them on my iPod in a second if I could.
My favorite song is

Fantastic improvement on an already great (if a bit repetitive) game. I would be all over a standalone version of this, or better yet a version that could be integrated as an interactive visualization in a media player like Winamp or Media Monkey.

7982757 on one of the longest songs i could think of quickly.....knights of cydonia by muse

Enjoyed the original - think I like this version even better.

Playing off of Chaos Creator's idea, I tried the longest song I could think of - the 23 minute Supper's Ready by Genesis - got the combo up over 250 twice (270 was my max limit before my eyes would cross) and my score was 67,148,169....yeah, 67 million. Utterly ridiculous, but fun nonetheless.

Great game. Just great. I loved the original and played it several times because I found it to be so simple and fun. This one has just enough new features for extra replay value without ruining the simplicity. I love it.

It doesn't even have to be music. You can upload some white noise, an interview, even an audio book. The results are still quite interesting.

my favorite part about music catch is the music used. it's just so soothing and relaxing.
anyone know what songs were used for music catch 2?

For an exclusive interview with Isaac Shepard (creator and composer behind the game) please visit http://crosseyedblog.com/?p=603

I cant even get an URL to work..
Does someone else have that problem?
Id like to have a Kalafina song to play

Now this is an amazing game! The URL option made it even better.