Phantasmat: The Dread of Oakville

While on your way to a book signing (your own!), an avalanche distracts you from your task of terrible driving to strand you inside a tunnel, and between the unsettling flickering images you keep seeing and the threatening call on the nearby emergency phone, not to mention the creepy little girl crooning disturbing nursery rhymes, you're beginning to think AAA won't be much help here. But in Eipix Entertainment's hidden-object adventure Phantasmat: The Dread of Oakville, your troubles are just beginning. As you hunt for help in the dark hamlet, strange visions plague you, the locals seem more than a little out of it, and with missing persons fliers plastered everywhere, it quickly becomes apparent that you may be in over your head. Hunt through the town for clues, solving puzzles and rooting through piles of items in hidden-object scenes, and brace yourself for a jump scare or two. With gorgeous visuals, an intense moody atmosphere, and a story full of twists, Phantasmat: The Dread of Oakville is a stellar spooky casual adventure that's perfect for any night, dark and stormy or otherwise. 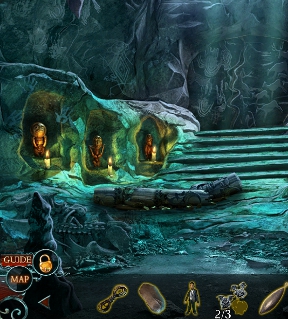 Like the original Phantasmat, The Dread of Oakville keeps you guessing with its story, though it ups the weirdness factor considerably. As you explore the town, you keep hearing about someone called "Mr Nightingale", and it's pretty clear the townsfolk were preparing for something big with the barricades and barbed wire everywhere, though the cryptic video you find from Aunt Mae (Effie? Is that you?) is more unintentionally hilarious thanks to a bafflingly sultry pose than anything else. It doesn't hurt that the game is easy on the eyes either, with a frankly gorgeous presentation and a solid soundtrack and voice acting for just about everyone. While it definitely has its corny moments, The Dread of Oakville can be surprisingly intense when it wants to, and seems to better balance those elements with storytelling and gameplay than its predecessor Phantasmat: Endless Night did... at least to a point.

On the whole, the difficulty level is set rather low due to the game's tendency to rely more on finding and using items than actual puzzle solving, though the most frustrating thing about it is likely to be how some portions are extremely fiddly about where you need to click to interact with something or use an object somewhere. Most players will probably fly right through it in a few hours, which is a little sad considering how captivating its setting and story can be when it gets going. The Dread of Oakville needs to have some of its more egregious backtracking pared down and let its cast and setting step to the forefront more often. Every time you think you know where the story is going, the game throws another little wrinkle into things... you'll still probably see most of the big plot twists coming, but they're executed well, and the story knows how to inject just enough doubt to keep you hooked. Like most casual games, there's a fully customiseable difficulty setting and a map that'll let you bounce from place to place with a click, in addition to keeping track of areas that have something you can do in them, making the game as easy to pick up and play as possible. As much as I wish the game had taken a more no-holds-barred approach to its gameplay, there's no denying that The Dread of Oakville still makes for an engrossing experience while it lasts, full of unsettling scenes, bizarre puzzles, and more creepy dolls and hollow-eyed spectres than you can wildly keep a swing at to keep at bay from your tender flesh.