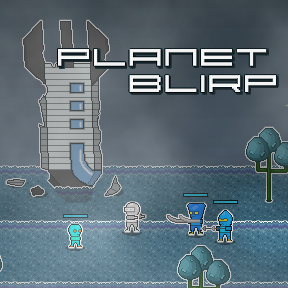 Your astronaut team has waited months for this moment: finally stepping on the fabled and mysterious Planet Blue. Of course, your commander has assured you that the planet is a barren wasteland, containing absolutely no malevolent aliens of any kind, and thus you are all in perfect safety... Well, guess what? Planet Blirp is a fun little action shooter from Helmet Games. As side-scrolling arena shooters go, it's a little by the numbers, though it does have some cool features that separate it from the pack. The story line is clever, there's a nice variety of mission objectives, and the way your companions will join you in blasting once you've rescued them is a cool touch. Downsides are a steep learning curve where challenges start getting too brutal too early, and some glaring typos in the script... "YOU LOOSE"? Geez. Anyways, even if Planet Blirp feels familiar and is definitely heavy on the grindy, it remains a solid shooter and an excellent time-waster.

Nice game. Unfortunately there is a visual bug causing "residue" from the "XP pop-ups" to stay as grey shapes in the middle of the play area making it essentialy a blind spot.

I've seen a lot of bugs. I had the one gASK mentioned, my health bar isn't visually updating after I purchased upgrades. Its longer, but the red part is static, and its not updating based on damage. The controls tend to not register when I stop pressing, sending the character running in the wrong direction.

On the main page, in the "(!) New Free Online Games" section, this is listed as "Planet Birp". Granted, it's extra comedy value, but still...

[Thanks, that should be fixed by now. It was my sleepy typo early this morning when putting the game up in the online games portal before calling it a night. -Jay]

Vaguely fun in principle, but buggy and grindy (as others have mentioned) and poorly balanced. I maxed out all my skills and purchases when the game still had 3 missions to go.

Also, the "you must clear all enemies to leave the area" mechanic between missions could be deeply frustrating; if you're near your intended exit but the last few enemies ling on the far side of the area, it isn't always possible to clear them out and return to your intended exit before the next wave begins.