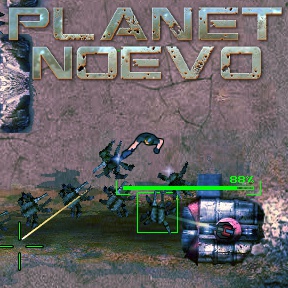 Just sit right back and you'll hear a tale, a tale of a survival game by Louissi, creator of Catapult Madness and Neon Rider. Planet Noevo is a combination arena shooter, base defense and survival game where you play as a stranded space colonist trying to survive on a hostile alien planet. Presumably you've already ate Gilligan, so you're on your own for ten days until a friendly ship comes to rescue you. You'll have to explore the planet's surface to gather resources, manage your hunger level and energy and deal with loads of alien monsters using an arsenal of high-tech weaponry.

Moving around using the [WASD] keys and aiming using the mouse, you'll wander across the surface of the planet fighting off aliens along the way. Your colonist is armed with a variety of weapons including pistols, rifles and rocket launchers, all of which do a great job of splattering aliens into goo. Standing still in an unexplored space will gradually dig it up, earning you resources that you can use to upgrade your base or build new items and equipment. There are several different resources, most of which are shared between upgrades, so you need to prioritize what you want and save up. Resources are also used to build rations and medical kits, which are necessary to keep your strength up as you explore.

Planet Noevo runs on a day and night cycle, and at night the aliens become much more prolific and aggressive so you need to hole up in your base until morning. You lose the game if your base is destroyed, but it's fairly good at defending itself with an automated turret so this isn't really an issue. Time passes quickly at night so this isn't as much of a pain as it could have been. Instead, it's a great time to upgrade your gear and level up.

Initially your character is fairly weak, but as you fight off aliens you gain experience points and level up. Each level earns you several stat points that you can use to upgrade various attributes, including speed, how much damage you deal with weapons and how quickly you dig up resources. You also gain experience for enemies killed by the automated turret on your base, which is a nice touch and helps keep night from feeling like a total waste of time.

There are two main gameplay modes in Planet Noevo. In Story Mode you're trying to survive for ten days, as mentioned earlier, while in Arcade Mode you're aiming to survive as long as you can. The former serves as a sort of tutorial for the latter, which is the real meat of the game. 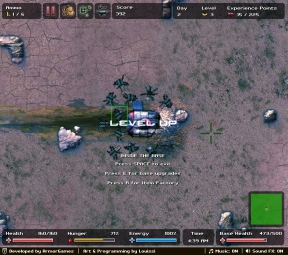 Analysis: Planet Noevo has managed to nail the carrot-on-a-stick gameplay model. There's always another weapon upgrade or level just within reach, pushing the player to keep going for just another few minutes. The weapon types are varied enough to mix the game up, and resources come gradually enough that it feels like an accomplishment to build that new, shiny toy. All in all, this results in an addictive experience, but there's still a flaw or two.

First, and this is prominent enough that it bears mention before anything else, the final boss of Story Mode drastically ramps up the difficulty to such an extent that it casts a shadow on the rest of the game. Without the best available weapon and decent armor, this boss presents a nearly insurmountable challenge. It's possible to defeat on a second playthrough where the player knows which upgrades, gear and stats to aim for, but it's unlikely anyone will be ready to face it on their first time through the game. I'd recommend skipping the Story Mode entirely because of this and going straight to Arcade Mode, which is the same game without the 10-day time limit.

Also, the survival aspect of the game seems a bit tacked on. Ration resources used to make food are readily available and are only used for minor base upgrades otherwise, so the hunger meter serves as more of a "gotcha" if you forget to make food at night than anything else. It's not so much a source of anxiety as a source of annoyance. Likewise, the energy meter drains so slowly while exploring and is refilled so quickly in the base, even without upgrades, that it might as well not be there at all. Survival is an important part of the game's theme, so these gameplay elements are there for a reason, but it would've been nice if they had been better integrated into the experience.

These problems don't prevent Planet Noevo from being a solid casual experience. Despite the game's claims that it's complex and difficult to understand, it really boils down to a high quality arena shooter and defense game. Between combat, resource gathering and defense, there's plenty to enjoy here.

The game is fun, but I can't seem to be able to start a new game. I've cleared my cookies, but it still gives me the game I was playing. Not sure how or why.

I'm having the same problem as Izme, it plays the intro when I press "New Game", but sends me to an old save file I didn't even remember I had.

Well, you're ahead of me, Izme. I can't get past the Start Game screen. I get the Story/Arcade menu screen and everything freezes. Updated Flash (again) and tried it on Chrome, Safari & Opera on my MacBookPro. No go. Sad.

Strange... I disagree with the reviewer... I thought it was much too easy, until the last boss which was a good challenge. It didn't come close to killing me though and I had only a mid range gun and armour? Am I playing a different version?

Nice game though! Reviewer is definitely right in that it manages to compel you to continue without changing the gameplay particularly.

Didn't work in Firefox for me but worked in Chrome (using Windows).

I thought it was horribly unbalanced, even if I ignore the final boss that appears out of nowhere.

This strongly reminds me of another game I played a few years ago. It was a download game for windows, and you were an astronaut whose plane crashed and you were stranded on an alien planet. You had to collect weapons and various eletronics to construct new devices to defend your "base"(which you could construct wherever you wanted, and even pick up and move if you wanted to), because when it got dark at night all the creatures of the alien world came out. I've forgotten the name of the game, though...what am I thinking of? :\

Nice but it's too hard when you go far in the game. I would have like to be able to keep upgrading when I got a level up (not get stuck at 30) because the enemies seem to get stronger and stronger, and not my character!

There's a game called Notrium that's very similar to this one. It might be what you're thinking of.

I like the game, but I feel that Armor Games is posting a rare beta version. There seems to be an exponential growth on the enemies and a cap on player growth. If cap on player growth is meant to cap points, that's a horrible way to do it. Not to mention I can't (even from another browser) start a new game. Getting through level 10 on story mode was too easy, getting to day 25 afterward gets hard fast, especially when level ups become useless.

Also, the tutorial itself says to hide in the base at night. After a quick while, you have to get out and draw the crowd away from the base to keep the base alive, even though the base is maxed out. There's gotta be a way to keep upgrading the base if it's going to be used at all at night.

There really should be a "build your own rescue shuttle" option that lets you end the game on arcade mode. Otherwise I fear you'd 'mine' the entire map and just end up surviving an ever increasing hoard.

I'm generally more than pleased with Armor Games releases, but this one seems like it snuck out too soon. I await the grand rebalanced act.

be a nice game if you could start a new game. took a few days to figure out how to mine and now cant start a new.

anybody else find they can't actually start a new game unless they delete the relevant flash cookie?

Nice game, but to short..

Can't figure out how to kill the giant worm. Any suggestions?

I'm having real trouble with the controls. There's no auto-fire, and when I move in one direction using WASD, I can't stop moving that way. It's impossible to navigate around, or get into my base. Maybe it's just a problem with my computer, but it makes the game frustrating and unpleasant to play.

I managed to do it by doing the following:

At the beginning of the game, I focused on using levels up to max out my digging attr. Then I focused on speed. And then armor and dexterity. I used the resources to build up my armor, helmet and weapon (waiting long enough to skip over one or two items). I did the same with the base.

I got the hang of this game pretty quickly and made it to about 32 days of survival mode. After a while it literally becomes impossible because the creatures keep evolving without a way to upgrade your base and weapons to defeat them. Overall pretty great. 4/5