You work fast, don't you detective? Little Suzy hasn't been missing for more than a few hours when you show up in town. But this isn't your normal missing child case; Suzy was kidnapped by a mechanical monstrosity unearthed in the newly excavated series of caves on the outskirts of town, and if you go poking around in them, you might find there are more secrets hidden beyond the rubble than anyone expects. Puppet Show: Lost Town is easily the best title in the popular hidden-object adventure series yet, combining clever puzzles, bizarre environments, and a fantastically creepy vibe for one top-notch experience. 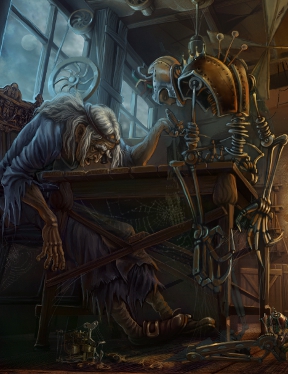 Lost Town comes with two difficulty modes, the primary differences between the two being whether or not interactive areas are highlighted and how long your hint/skip button takes to recharge. Gameplay is fairly typical, and handled entirely with the mouse, clicking to pick up or use items, and otherwise interact with the screen. Items you've gathered will be kept in your inventory, which you can access by clicking on the "tools" button on the left side of the screen, and scrolling through any objects you have available. Lost Town strikes an easy balance between hidden-object hunting and standard adventure gameplay, with a healthy dose of puzzle solving to fill things out.

Analysis: The story is, as you've probably come to expect, a little silly, but pleasingly so; the whole series has always been sort of over the top, and if you've played any of the previous titles you know you don't come expecting anything serious. There are trap doors, spider dolls, neme... uh... nemesy... nemeses, and unorthodox puppets galore. There's also a ton of animation this time around, and watching the strange puppet designs lurch to life in cutscenes is as impressive as it is nightmare fuel. If you've played the other games in the series you might be disappointed to hear the same soundtrack recycled here again, but overall you'll be able to see how far the series has come.

There are times when it feels like the game's big environments work against it somewhat. After you pass the first few areas which act as a tutorial of sorts, the number of places you're able to go greatly increases, as does the amount of items you'll have filling your inventory. Keeping track of what item might work where and any unsolved puzzles or things you need to come back to "unlock" can mean a lot of back tracking, especially once hidden-object scenes start repeating themselves. It really is sorely in need of a Sherlock Holmes: Hound of the Baskervilles-style map (I'll stop harping about it when more casual games start doing it.). As anyone who has ever spent a vacation running around Disney World will tell you, even the most interesting places start losing some of their appeal after you've gone back and forth through them six times in one day. 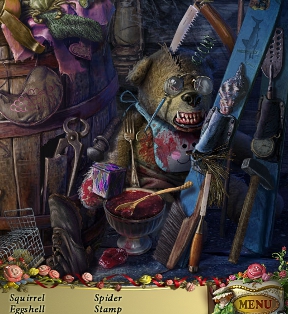 The puzzles are, even if not particularly difficult, wonderfully creative and a welcome departure from the samey variations plaguing most other games in the hidden-object genre. The game does wind up feeling a little predictable; most of the gameplay revolves around encountering a puzzle that's missing a piece, tracking down that missing component, and then doing it all over again a few steps later. This might be a bit more annoying if not for the fact that all of the environments look fantastic, with a surreal, morbid vibe that makes them wonderful to explore. Everything is packed full of unusual detail, from the areas you'll walk through to the hidden-object scenes themselves; it really feels like the designers just cut loose. If you didn't think puppets were unsettling before with their judgemental, unblinking eyes and rigid limbs, you definitely will after an encounter outside the barbershop in the Lost Town.

The overall length of the game is obviously going to vary, but a ballpark figure for standard mode is probably five to six hours, including the bonus chapter. Whether that merits the purchase is between you and your wallet. For me, at least, I can say that despite a few flaws, I feel that PuppetShow: Lost Town delivers on all fronts. The series as a whole has always reached high for quality, and Lost Town sets the bar even higher on almost all fronts. Does it leave the door open for another installment? You betcha. But for fans of the series, this is hardly bad news, and if you enjoy the genre but have never given the PuppetShow titles a spin, there's no time like the present to check out the demo.

A Collector's Edition is also available. It contains a bonus chapter to play, wallpapers, strategy guide, and more. Remember that Big Fish Game Club Members pay only $13.99 for Collector's Editions, and collector's editions count 3 card punches of 6 total needed for a free game.

Chapter 3 - Center of the Town

Thank you, Dora, for your great review and especially for including the length of playtime for this game. It's very much appreciated :)

Chapter 3 - Center of the Town