PuppetShow: Souls of the Innocent

Ladies and gentlemen, I submit to you that puppets be freaky. Never, ever trust anything with a tiny porcelain mouth and unblinking painted eyes. You should have already learned this, but just in case, here's PuppetShow: Souls of the Innocent to drive the point home. It's a direct follow-up to last year's Mystery of Joyville, and this is one point-and-click/hidden-object hybrid that manages to look good, and be just a bit creepy while at the same time being completely ludicrous. My favourite combination! 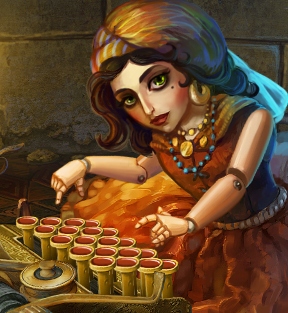 Souls of the Innocent takes place some time after the original, when your admirable detective skills get you summoned to a tiny village. It seems all the children have fallen into impenetrable slumber, and those adults who haven't also begun to fall under the sinister spell have fled the city. Suspicion has fallen on everyone from the toymaker to the fortune teller, but you suspect there might be a familiar face behind the mystery. No, not Angela Lansbury. Unfortunately.

You'll spend your time exploring strange locales, keeping your eyes peeled for the tell-tale wink of an item to grab, or the sparkle of a hidden-object scene, which will give you an inventory item upon completion. The "hint" and "skip" buttons take a while to recharge, but you probably won't need them much anyway. The game is good at giving you direction as to where you need to use items, so whenever you come across an obstacle, it's typically always clear what you need to get around it. Just try not to get sidetracked by all the mutilated, stitched dolls strung up all over the place, just waiting for you to look away so they can reach out their tiny, articulated fingers to the soft, unprotected back of your neck and ughughughughugh. Dolls. Why'd it have to be dolls?! 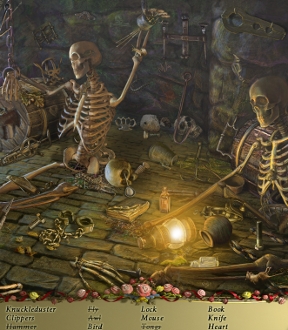 Analysis: Souls of the Innocent is one of those games that you enjoy more if you don't let yourself think too much. The plot is fairly ludicrous and prominently features homicidal puppets and a duel with a robotic crab within the first half hour. Not to mention Felicia is a terrible name for anyone's "nemesis". But you can pick apart the more ludicrous plot points all you want, or you can throw your hands up in the air and go, "WOOO!" every time something new and bizarre appears. I know which one I prefer, and if you approach the whole thing with the same attitude you would reserve for any cheesy horror flick, you'll enjoy yourself a lot more. The game has an absolutely beautiful, creative sense of design in everything from its interface to its environments, and it's a real joy to explore. It's just a shame the writing isn't quite up to carrying along the creepy atmosphere the game is trying to convey. It's not bad writing, exactly, it's just... um... there. Stephen King it ain't. (You can tell because it's not trying to charge you twenty dollars for a story it already wrote fifteen years ago.)

In terms of difficulty, Souls of the Innocent strikes a nice, easy balance. Everything feels just challenging enough, with a nicely varied set of puzzles to solve, and the hidden-object scenes in particular are very well done. All the items suit their locations, and you'll rarely have to strain your eyes looking for tiny, skinny things. The only real complaint to be had in this aspect is actually that the art style tends to be deliberately shabby-looking in certain areas, and that can make some items appear washed out and more hard to find.

Unfortunately, Souls of the Innocent makes a common mistake for adventure games and subscribes to the "Just Because" school of item usage, requiring a specific item for tasks that could be solved by almost anything in your inventory. (And what kind of detective is put off by some measly spiderwebs? You're fired! Don't come back until you're Robert Downey Jr!) The game also enjoys a fair amount of back-tracking, which can get frustrating. The first portion of the game involves trekking around a handful of locations in a small town, but the latter half sees you stumbling around a very large castle, where having to go from one end to another just to pick up a single item can be annoying.

PuppetShow: Souls of the Innocent is fun, beautiful, and at around three to four hours depending on your speed, a fair chunk of adventure. I also never knew there were so many uses for unspeakably creepy doll mechanisms, so I suppose it's educational, too. It's not perfect, but with its rich design and memorable locations, it's far and away one of the more unique hybrid games you'll ever play and is certainly worth a look.

Lol, what a concept. I have to play this one.

Alright.
Silly premise.
Good animations, but they were generally out of place with the backgrounds.
I hated having to redo scenes. Yes, I'm finding different things. But the only reason I wound up back there and saw I could do it again was because there wasn't many places to even go.
The intro was pretty cool, but kinda ruined half the plot. I did get into the castle before my hour was up, though.

I love the music used in both Puppet Show games.

The storyline is still better than the first one. It's a little more fun, too.

Where is the 3rd block for the crystal cave by the landing of the hot air baloon? I have gone through the rooms and 3 towers 10+ times?

I hope that helps!

I'm at the part where you have to feed the mechanical fish the nuts so you can get the key. But how do I get a wrench?

what do i do with the pickaxe?

Where is the wrench for the nuts