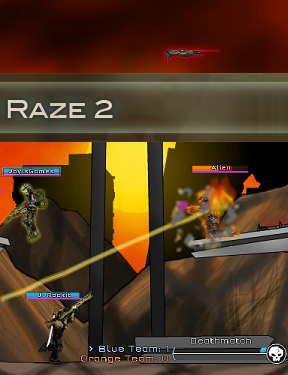 Raze 2 by AddisonR and Juice-Tin is the latest in a long line of action arena shooters with spacey-marines and/or one-word non-indicative titles. Let's count them off: Doom, Quake, Halo, Descent, Unreal, and, uh... Haze. It's surprising there are any alien-demon-zombie menaces left to battle, considering how quickly we can deploy a near-endless supply of Master Chiefs. It's a good thing then that Raze 2 has the quality gameplay and presentation to distinguish itself from the competition.

Raze 2 tries for a fairly in-depth story mode, but it boils down to this: You're a human. Over there are alien-zombies. Get them. Using the [WASD] or [arrow] keys to move around and the mouse to aim and shoot, you must outkill your opponents or reach your objective, with or without a partner by your side. Cycle through your weapons with [Q] and [E], or wield them directly with the [number keys]. Use various special abilities with the [F] key. Each round grants you credits to be used to purchase upgrades, new abilities and other items. Complete the first campaign, and you'll have a chance to take revenge on those slimy humans.

Raze 2 is fast, frenetic and fun... should your CPU be able to handle the load. Fans of the original will recognize this as the half-update/half-sequel that it is. That's not a bad thing, though: with streamlined gameplay, a host of new weapons maps and play-modes, and one of the best soundtracks heard so far this year, Raze 2 might seems a little generic to those not already sold on the concept of racing around maps blasting zombie-aliens. However, fans of the genre should enjoy the multitude of play options, the two-perspective campaign, and the touch of juvenile humor: letting the player know that they've succeeded in eliminating their foe with a shot to the butt may not be the most mature thing in the world, but hey, in a war-zone you have to make your own entertainment. It would have been better if teammates were more distinguishable from enemies, and the lack of online multiplayer is a sad omission, but for fans of arena shooters, Raze 2 raises the bar.

The last level of the alien campaign is absolutely impossible.

You have to kill the Raze soldier six times in four minutes, but even with double damage, rapid fire, the highest dps sniper rifle, etc., he simply doesn't go down because he has around 3x the life of everybody else. In addition, he carries around a rocket launcher that takes you down in two hits. You can bring him down to three lives, but with all the time searching for him, it's hard to see how to improve this number. How are we expected to complete the game?

I see my comment was changed a bit to become more readable. It's nice to have an editor :)

When you are up against enemies who can be taken out by the Holy Grail in one shot, there's no reason not to use it. Use the ammo-regeneration perk, the 70% ability-recharge perk, and look for sniper rifles wherever you can. It's possible to rack up massive killstreaks up to 30 and over (and indeed, it's the only way to complete some levels such as the last CTF level in the alien campaign. Simply point it down the hallway, fire it at some unsuspecting human off-screen, and watch your kill counter go up continuously. The alternative is to get mobbed by rocket launcher missiles everywhere, and they really hurt.)

i agree.
it's so hard

ok, I've never played and I can't get through the tutorial when johnny rockit says
"hmm, there's no pipes up there, you might need to use something else on this panel..."

What is he talking about? I've jumped everywhere, tried to knock down things, shot almost everything with both guns, refilled my gun to 9, shot it all again...

when i first did the last level of the first campaign i got stuck in a giant rock at the start to. i started all over again on a different website and alls good now :D

How do you get the mode unlocking achievements besides "Oh Hi Kitty"?

Sooo why haven't y'all reviewed Raze 3 yet?