He saw the zombie virus come. It's slowly taking his daughter. His research might someday save the world, but it won't save her. Not with what he has now. Not in time. If there is a future though, it's one that should belong to her. And so he travels to the future, hoping to steal a dose of the vaccine they must have made. It is a faint hope, he knows. But he has no other to cling to. But what will he find when he takes the time to reflect? RETSNOM is a puzzle-platform game by SOMI that has you reversing the world around you in order to move on. 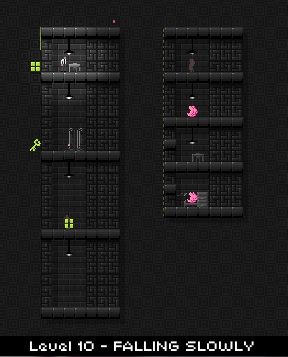 Move with [left/right] or [A/D], jumping with the [spacebar]. [Up/Down]/[W/S] allows you to read notes, climb ladders or, when not on a ladder, to zoom out to get a better view of your surroundings. In each level, the goal is to make it to the door that connects to the next. These doors must be activated by stepping on pressure panels, collecting the two pieces of it, and unlocking it with a key. Your main tool to complete these levels is a mirror you pick up in the first level. By activating it with [ALT] or [M], all the blocks in your general vicinity will flip their position within a given surrounding square (unless doing so would give you the ol' telefrag, so to speak). You will stay in the same relative position while this happens. Stay inside the square, and you can switch it back. Move outside the square, and you can begin a new reflection (though they can only be reversed in the order they were created). It's possible to move blocks across an entire level with the mirror, provided there is space and you're careful enough. More advanced techniques and different kinds of mirror features (like frost and concavity) are introduced over time. Watch out for the lingering infected (pick up a gun, and you can shoot them with [B] or [CTRL]), and, if you think you've got the mad skillz, try to grab some of the stuffed bunnies lying around for when you see your daughter again. If you see your daughter again. 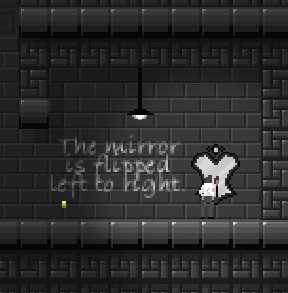 At the onset, RETSNOM (which, as Joshua Waits could tell you, is "monster" spelled backwards) is kind of misleading. The introduction to the game promises much more of a claustrophobic and exploration-based kind of game that is not quite fulfilled by the disconnected mostly-single-screen levels that follow. Between that, the initially steep learning curve with the game mechanics, and the dirge of a soundtrack, one can imagine that at least a few players would turn away before seeing all that RETSNOM has to offer. It would be their loss, though, as RETSNOM is a well-constructed, challenging game based around a unique central mechanic (a comparison to FEZ would not be out of order, at least in pure gameplay terms.). Getting the hang of the world-flipping takes some practice, no doubt, but it also allows an impressive amount of freedom to come up with a solution for each level. Of course, some don't come easy: it's no surprise that many of the updates to the game have come in the form of added checkpoints and level tweaks. Overall, though, RETSNOM is a game worth the mental investment, telling an engaging story with a brand of puzzle you won't find anywhere else.

Windows:
Get the full game

Allow me to be the mood-killer by pointing out that "RETSNOM" is a few letters away from being "RESTROOM".