Rumble in the Soup

[Editor's note: This game's violence is largely cartoony, but be aware that some enemies leave behind red sauce on defeat which may be resemble blood.]

Shirley Temple's animal crackers never had to deal with this. There's a Rumble in the Soup going on, instigated by one The Shpufa, and it's every prawn, crouton, and ghost pepper for themself in this all-out brawl! You're the lone rubber duck tasked with bringing order to this mad appetizer in a shooter game fashion. Guide your squeaky Rambo around with either the mouse or the [arrow] keys, and he'll take care of all the tricky aiming and shooting for you. Rescue your fellow duckies, take down tyrannical bosses, and serve up a four-course meal of liberation! Rumble in the Soup's arcade action is stylish, humorous, and surprisingly filling given how simple it is. Not unlike a good soup itself, no? 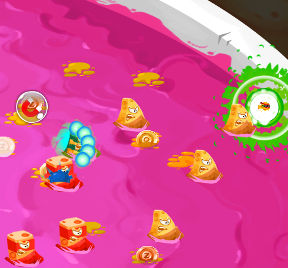 There's a bit of avoidance flavor in Rumble in the Soup. Since the game aims and shoots for you automatically, that puts more emphasis on avoiding enemies and projectiles for you. Thankfully, the battlefields in this game are chaotic enough that it doesn't feel like you're "just" controlling movement. Projectiles fly far and fast, enemies can easily gang up on you, and captured duckies will periodically appear on the field that will bomb all nearby enemies if you rush to their rescue. There are four levels in the game, each with its own boss, but the game also provides a number of missions to complete in each level to earn both money to spend on upgrades and a sweet, sweet sense of completion. Sadly, you can only do one mission per visit to a level, but there's a good chance you'll be visiting each stage multiple times anyway, as early on, the crush of enemies can prove quite overwhelming. The game wants to give you a fighting chance, though, and the coins you'll need for upgrades come quick and fast, thanks to both a convenient "magnet" move and the fact that you also earn coins for "leveling up," RPG-style. While the game does start out quite tricky, there does come a point once you've pumped thousands of coins into your guns and health that it almost becomes too easy. By the time you reach the final boss, you'll probably be too overleveled to really appreciate his great attack design. But the backgrounds and enemy designs are delightful enough that there's still a lot of enjoyment to be had just cruising through the soup and taking in your cartoony environs. Soup's on!

Play Rumble in the Soup

This game is a clone of Frantic Frigates if you want to play another game like it since this one is kind of short.

Really annoying to complete missions like "don't use a grenade" when saving one of you own triggers it and you can't do anything to stop it.