You've come a long, long way, baby. Derek Yu's smash-hit indie action roguelike Spelunky classic captured hearts and claimed keyboards the world over as a freeware title that didn't so much take up your free time as act like a black hole for all productivity. After a prolonged exclusivity period on ye olde XBox Live Arcade, Spelunky HD finally comes home to PC, bringing with it the hard as nails and brutally addictive gameplay we all know and love as well as a whole host of new content, from different characters to play as, to new enemies, areas, items, and more in addition to the shiny new facelift. 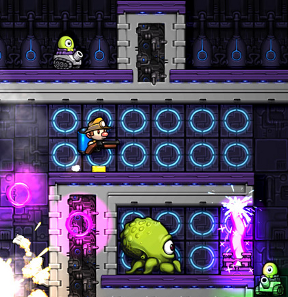 As in the original, the goal is to get to the bottom of a massive series of ruins that changes every single time you start over... which will be a lot, since death in Spelunky is frequent, painful, creative, and permanent. Blending fast-paced platforming action with the randomness and unforgiving nature of roguelikes, you'll use bombs, whips, ropes, and your reflexes to try to make it past every obstacle the game has to throw at you. It's that strange sort of gameplay that demands both caution and fast reflexes in order to survive, and it's not for everyone. After all, when you're punted off a ledge by an angry caveman right onto the bomb you just dropped that blows you backwards into a spike pit, it's hard not to feel like the game is chortling at you just a bit. Especially since the tutorial will only teach you so much and the rest of the tricks need to be garnered through cold, hard, experience. Usually the fatal kind. 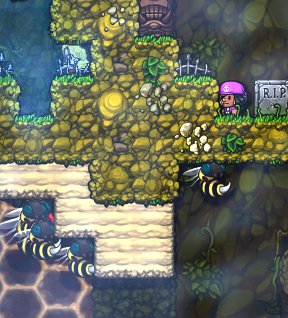 If all of that sounds familiar to you, well, it's because this HD release of Spelunky plays exactly the same as the original for the most part... though not all of the little tricks you'll have learned to get around things will function as they used to. Arrow traps, for instance, aren't as easy to sneak by, and most need to be triggered, while the arrows they shoot now come with an arrowhead that can snap off if it strikes a hard surface, thus making the arrow deal less damage if you throw it around. Movement feels a bit faster, a bit more responsive in a way that can actually send you hurtling past that ledge you were aiming for if you're not ready for it, and will take a while to get adjusted to if you're full of muscle memory for the original freeware title. But am I terrible at Spelunky HD because I don't have an XBox 360 controller, currently the only one it accepts, or because it's legitimately more difficult? Perhaps a bit of both, since areas feel a lot more densely packed with dangers now. 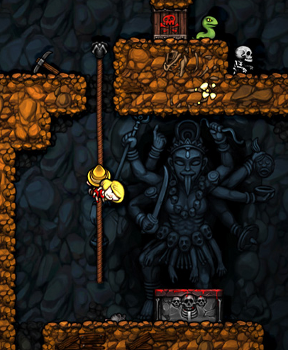 While there will always be those that prefer the original's pixelated graphics, Spelunky in HD still looks gorgeous. It's true that everything has a sort of soft, rounded Fisher-Price look to it, but the detail in environments and characters combined with the rich colour makes up for it. Speaking of cosmetic things, the additional playable characters are a nice touch, as is the ability to choose between lady, dude, and pug flavours of Damsel... or enable all three, if you're into equality. The change in music might also be a make-or-break swap for some people. It's catchy and well made in a way that perfectly fits the atmosphere and action, but the original soundtrack had a loyal following that might be a bit less than accepting of the newest tunes. A less cosmetic change is the secret stage you'll have to jump through some hoops to get through, as well as a few "optional" areas you can play if you know how to open the way.

Not everyone can love a game that feels like the better you get, the more it punishes for you, so if you haven't already, you'll want to try the original freeware version before picking this up. As a fan myself, however, the entire time I was playing and letting out the steady river of profanity that flows forth whenever I play Spelunky, I kept thinking about what an incredibly difficult game this must have been to remake. On the one hand, you have the people who are going to demand a lot of change and improvements to justify the purchase, and on the other, you have the people who are going to hiss and recoil from any sort of noticeable difference from the original. A lot of players will be disappointed to discover that multiplayer mode is only local co-op, which means that your dreams of bonding with people the world over through competitive play are essentially dashed. If you're playing on Steam, you can participate in the Daily Challenge maps... you can play each daily map one time only, and your score is ranked against all other online players.

Preference betwixt the two is going to come down to personal taste, but Spelunky HD is still an incredibly addictive, infuriating, and enjoyable game. It boasts a massive amount of replay value that promises not only will you never see the same map twice, but it's virtually impossible to see everything there is to encounter in one go. The amount of work that has gone into polishing and retooling absolutely everything without losing a scrap of the madcap deadly gameplay fans fell in love with is remarkable, and as a result, Spelunky HD shines in virtually every way possible. With all new items and areas to discover and enemies to destroy you when you're one step from victory, it offers a fresh new dose of the exploration and discovery that made the original such a hit, without ever losing sight of the hurts-so-good gameplay that made it such a hit in the first place.