Tales From the Borderlands: Episode Two

[Please note that Tales from the Borderlands is an episodic series. Purchasing the game grants you access to all episodes as they become available. Currently only the first and second episodes have been released.]

While I play and love a lot of video games, it's rare that I replay one, let alone several times in a five month period, so let that show you how much I loved TellTale Games' first installment of Tales from the Borderlands, which I played twice by myself and then again, forcing my husband to watch, so I would, theoretically, stop quoting it at him. (Without context, anyway.) Based on the wildly popular ultra-violent and ultra-hilarious shooter from Gearbox Software, the series follows Rhys, an employee for the villainous company Hyperion who gets tired of being jerked around but bites off more than he can chew when he tries to pull a fast one, and Fiona, a conwoman who's just trying to get by on the planet Hyperion has been ruining by taking care of her family the only way she knows how. As the series opens, we found Rhys and Fiona prisoners, each blaming the other, and we've since been treated to some very conflicting stories of who-ruined-everything-for-who as they recount the events leading them to now. At the start of the first episode, Rhys finds himself saddled with an apparently permanent new friend who has his own plans, while Fiona, after performing some experimental surgery, discovers something called the Gortys Project could mean big things for everyone... too bad she doesn't know what it is. With some of the funniest pitch-black humour around and exciting action sequences, Episode Two: Atlas Mugged breathes new life and depth into old characters and places, and delivers one of the best adventures around. 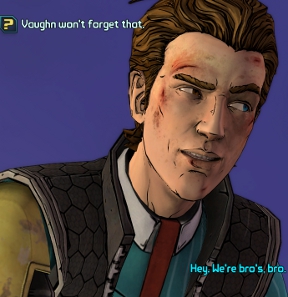 Like its predecessor, Atlas Mugged combines quick-time-events with classic point-and-click adventuring as you control both Fiona and Rhys. While there are a few puzzles you'll have to solve by knowing when and where to use or find the correct items you need to proceed, largely your goal is more to drive the story through your actions and decisions. Like all TellTale Games titles, there's an enormous emphasis placed on choice... it could be as small as deciding to thank someone for their help or as big as choosing between two locations, but there's a lot of it, and almost all of it has some impact on how the cast sees and reacts to one another. By now, most of the relationships you set in motion in the first installment are beginning to solidify, though there are still plenty of opportunities to change them. This can lead to some great character moments, such as the much-needed scenes between Fiona and her sister Sasha, but though the story and its cast develop significantly, more often the humor is at the forefront. 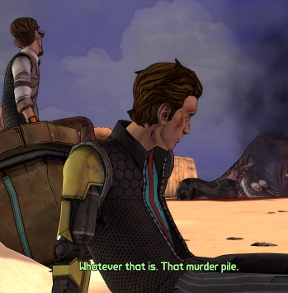 While Episode One was definitely funny, Episode Two feels like its cranked the dial to eleven, so to speak. The comedic timing is perfect, thanks to some great expressions, a dose of what you might call the anti-buddy comedy, subtle and clever fourth-wall breaking, and some truly great bromance. Fiona, Sasha, Vaughn and Rhys cement their places as characters you love, seamlessly integrating into the Borderlands universe, and Patrick Warburton's Vasquez makes a great swaggering bully. Atlas Mugged has maybe some of the best dialogue I've ever heard in a game, a natural banter and charisma that feels realistic instead of scripted. It kept a grin on my face the entire time, though I was already dreading the end of it... the start of the episode quite frankly acknowledges and pokes fun at how long it's been since the first installment (five. months), but hopefully we don't need to revisit that joke for episode three. 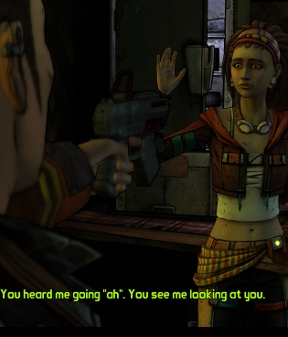 Atlas Mugged does a better job of balancing its break-neck, QTE-driven action sequences with more relaxed exploration and dialogue scenes than its predecessor, though it must be said that some of the game's chapters flow better than others. While there are several great fights and chases to be seen, Tales from the Borderlands shines the most when you're dealing with the characters and their personalities, sort of like Garth Ennis' Preacher, so when the action dominates the plot doesn't move as much as it could. The game culminates in one heck of a cliff-hanger that very nearly feels anti-climactic given the way the scene is built up and then ends, and while it left me eager to see what would happen next, it also left me feeling like I do when the last few minutes of a TV show I've recorded get cut off. But, well, as the saying goes, "always leave them wanting more", and I definitely do want more, a lot more, and it's not necessarily because I feel like I was shortchanged. Tales From the Borderlands: Episode Two is brilliantly witty, laugh-out-loud funny, freaky, and weird in all the best possible ways. We've always known TellTale can make great, impactful stories, but through Tales From the Borderlands it feels like they're finally letting lose with all the appropriately inappropriate humour, wit, and craziness that's been reigned in dramatically in games like The Walking Dead, The Wolf Among Us, and Game of Thrones. Even if you're not a fan of the other shoot-em-up games, if you love comedy, adventure, and don't mind a few buckets of blood, Tales From the Borderlands should be on your shortlist of games to play.