The Curse of the Ring

As hidden object games go, you can pretty much bet you're either trapped in a haunted mansion/castle/town, trying to find your lost adventure-loving grandfather/uncle/sibling, or are wrapped in some sort of ancient magic that does nothing but bad. The latter happens to be true with The Curse of the Ring, a quirky, cheesy sort of hidden object game with a good battery of puzzles and a storyline that involves a ghost pirate as well as lost treasure! 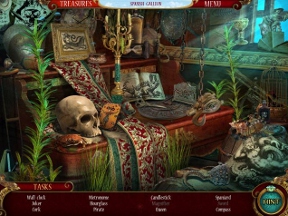 It all begins in what amounts to a junk shop with a mysterious ring that is said to choose its wearer. As luck would have it, you're the first person the shopkeeper has ever seen chosen by the ring, but as soon as you don it, Captain Flint appears with a nasty grin. He demands his treasures back, and to find them, you'll have to search through sunken ships and other piratey locales across several flavors of hidden object scenes.

The Curse of the Ring alternates between hidden object areas and more puzzle-oriented adventure-style sections. The former is the standard list of items and a cluttered room in front of your eyes. Items are smartly hidden without resorting to camouflage trickery, and a generous hint timer (if you're in casual mode) nudges you along when you're stuck. After the objects have been sorted, you'll enter the more interactive adventure mode where you'll need to check your task list, find a few items based on their silhouettes, and poke your cursor around the screen to see what you can interact with or what mini-scenes you can uncover.

Some items you need won't be found in the current scene, so The Curse of the Ring helps you by displaying a lock icon over its silhouette icon. This means you'll have to look hard to find it, zooming in on an area or moving to another location to discover the hidden thingamabob. 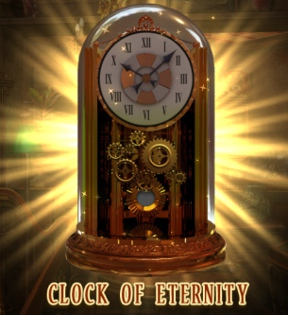 Analysis: The Curse of the Ring screams some well-worn hidden object clichés from the get-go, but you immediately get the sense it is, in part, a stylistic choice. Pirates haunting a girl in Barbados? An ultra-valuable clock? Hunting for scuba gear? What this boils down to is that The Curse of the Ring doesn't take itself too seriously, meaning you won't be forced to sit through strained plotlines or forced gameplay mechanics. Just straight-up hidden object/adventure experiences lined up one after another.

The Curse of the Ring also remembers to hold on to some of the better traditions in the genre, including a choice of casual/advanced modes, a refilling hint timer, and the option to skip mini-games. In fact, most of the mini-games are rather simple, and you won't mind skipping a few here and there.

The Curse of the Ring stutters a time or two, with a varying degree of visual spunk and objectives that aren't always entirely clear. But on the whole, the puzzles are interesting and do make you think before you click, which is always welcome in a hidden object game. It may not reinvent the genre, but The Curse of the Ring doesn't care. It's a well-constructed piece of game that'll satisfy your craving for object hunting without any real fuss.