The Several Journeys of Reemus: Chapter 4 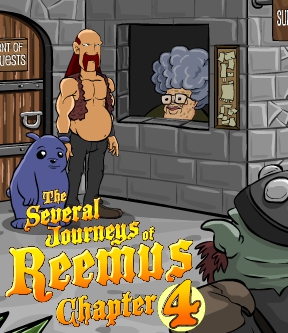 Poor Reemus. He can't catch a break. After being overshadowed by his brother all his life, the paunchy exterminator finally has the chance to save the kingdom and be a real hero... provided he can prove he's got what it takes to the most deadly foe of all... a governmental filing system! The Several Journeys of Reemus: Chapter 4, the latest point-and-click adventure from Jay "Zeebarf" Ziebarth and Steve Castro of ClickShake Games, follows the titular mustachioed do-gooder and his cuddly-wuddly sidekick/problem solver Liam as they struggle to get their application together. That might not sound very exciting, but the Department of Heroic Quests wants more than a neatly formatted cover letter...

To get permission to save the kingdom, Reemus and Liam need to get three heroic quest references, a "danger sample", and then submit their form "online" if they want to avoid the lengthy filing time. Fortunately for them, there's a corkboard nearby full of pleas from people who need all sorts of help. Just click and choose what mini-adventure you want to set out on, in any order you like, though eventually you'll need to complete all of them to proceed. Items you gather are stowed in your inventory at the top left of the screen, right next to the map that lets you navigate around the kingdom to the different quests available. Each quest is self contained; it has everything you need to finish it within its particular set of areas, so all you have to do is figure out how to make it all work together. Click the arrows at the bottom of the screen to navigate around and experiment. After all, this is Reemus and Liam we're talking about here; if their problem solving involved anything less than kidnapping via potato-men, slavering death slugs, and a whole lot of head lice, we wouldn't be nearly as interested. That's right, you monsters; they face peril for your amusement. 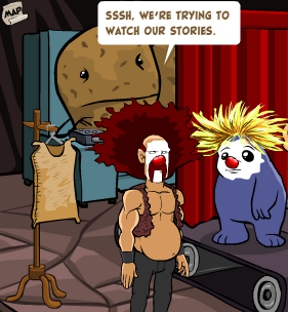 Analysis: The Several Journeys of Reemus is one of the most popular adventure series on the site, and just playing one of them should tell you why. They have a knack for blending surreal environments, oddball humour, and bizarre characters that makes them easily stand out from the pack. It's been almost three years since the release of Chapter 3, during which time the developers were working on certain large Reemus-related projects, but Chapter 4 provides a great return to form with everything we've come to expect. The quests are creative and silly, the designs are quirky and imaginative, and, of course, the game is more than a little funny. While splitting the game up into a bunch of smaller quests seems odd at first, it actually works in the game's favour, since it allows you to explore a wider variety of locations and scenarios.

Those pocket adventures also means the game flows really nicely, allowing you to hop between them at your leisure without forcing you to hunt down solutions or items in different locations. Instead, by keeping everything contained, Chapter 4 never really feels that difficult because it's so good at providing you with exactly what you need, and you always know everything else must be close by. The puzzles are as bizarre as always, and again make use of their environments and characters in clever ways that encourage you to submerge yourself in the series' signature brand of logic. It's weird, but it works, and it's part of what makes Reemus and his adventures so great. The Several Journeys of Reemus: Chapter 4 is a bit longer than previous installments, though it will probably still be over too soon for most fans... but of course there are also other new ways to get your Reemus fix if you're interested. While it doesn't really provide any new or innovative gameplay, Chapter 4 still serves up all the action, humour, and strangeness you've come to expect and love from the series, and you should definitely fire it up.

Play The Several Journeys of Reemus

DANGER ALERT AT THE BEACH

DANGER ALERT AT THE BEACH

In a funny coincidence, I discovered this game series just yesterday and quickly fell in love with it.

Time to see just how well I can do before having to resort to the walkthrough!

I really like the music in the Reemus series. I've noticed they reuse quite a few music tracks (not that I'm complaining; if it ain't broke...). For example, this game's final puzzle sequence has one of my personal favorite tracks; it also played during the finale of the prologue, and during one of the scenes on the "aggressive" route in Chapter 3.

I wonder if they've got an album on iTunes.

There'd better be one more game so we can actually see Reemus and Liam defeat the invasion.