Please be aware that this game received a rating of R due to intense graphic violence, profanity, and mature themes.

What's that old saying... out of the frying pan, into the fire? Clementine, pint-sized heroine of TellTale's point-and-click adventures The Walking Dead games, thought she'd finally found some breathing room in All That Remains when she stumbled across a house full of wary survivors. But in the next chapter of the harrowing series, The Walking Dead Season 2: A House Divided, Clem wonders how well she really knows her new companions when a stranger who they desperately want to avoid comes knocking one day while she's home alone. As Clem, you'll explore and solve puzzles, but the series' main focus remains on the choices you make, and at times it's hard to tell what's more dangerous... trying to earn the trust of your new group, or surviving the zombies outside. If All That Remains was a portrayal of how much more harsh life has become this far into the apocalypse, then A House Divided is about the way people themselves are getting even harder around the edges. As Clem gets to know the people with whom she's cast her lot, you'll start to realise that everything is a lot more grey than it used to be, and sometimes it's the people you trust the most that will get you killed... even if they don't mean to. 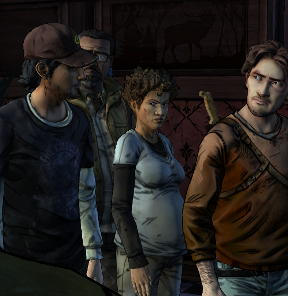 A House Divided is less action focused than All That Remains, or at least much better at balancing action and story/character development, and frankly feels stronger for it. Seeing Clem have to work to connect with and gain the trust of this new cast of characters feels a lot more like watching her grow up than simply being forced to commit acts of violence. It's an interesting dynamic, since these people don't know her and thus still view her as a child most of the time, which makes getting her voice heard a lot harder than it ever was for Lee. And speaking of Lee, incidentally, A House Divided really manages to drive home how much replay value the series offers. As Clem talked fondly of Lee and the things he'd done, I couldn't help but wonder how drastically different that exchange was going for others players who had made different decisions. A House Divided finally provides some chances to get to know the new cast members, which was sorely needed two episodes into the second season. Luke still feels a little flat, but the rest of them begin to define themselves more firmly in a way that hopefully gathers momentum down the road. So many new people have been thrown at us all at once these first two episodes that it can feel like they're scrabbling for film time, so chances are you'll care about some more than others simply by virtue of who's actually had a chance to establish themselves the most. At the same time, however, some characters you'll meet for the first time here will surprise you in some pretty significant ways if you let them, and towards the end I was left feeling incredibly guilty of my til-then unrelenting distrust and suspicion of one in particular.

The narrative gains some steam as you're forced to make decisions that draw lines in the sand, and the consequences of The Walking Dead: 400 Days begin to show. You'll finally start to feel like the waters are muddy, as the choices Clem has to make aren't all about what's right and wrong, and it can be impossible to know what will come back to bite you later on. I felt torn in a way the first episode hadn't made me feel, and there were times I was literally holding my breath as incredibly tense scenes played out. It's a welcome complexity that really makes season two feel like it's grasping all its threads and pulling them tight... right before it ends on a pretty huge plot point just two hours in. TellTale's The Walking Dead games have always felt like they're at their strongest when they're placing just as much emphasis on character drama, if not more, than on making you flinch from gore or violence, and in that respect, A House Divided manages to succeed brilliantly without sacrificing any of the hard punches the series has become known for in the process. The next episode can't come soon enough.