"I don't want to scare you, but we're going to do a lobotomy." Here's a protip; if anyone ever says that to you... worry. Especially when you're the one strapped to a hospital bed. In Alawar Games' hidden-object adventure Twisted Lands: Insomniac, you play Angel, whom you might remember, an amnesiac young woman who was found wandering on a beach and has since been committed to psychiatric care after terrifying visions and hallucinations have reduced her to hysterics. Rather than succumb to the (questionable) efforts of her doctors, she decides to escape, but her bizarre nightmares won't leave her alone and she might not be as crazy as she appears. 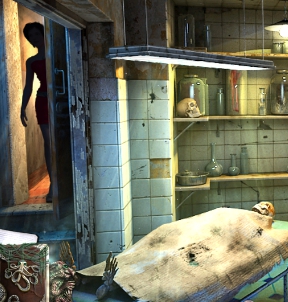 In this direct continuation of Twisted Lands: Shadow Town, as Angel you'll travel between the sinister hospital she's been locked in, and a bizarre dark other world. The gameplay is your standard pointy-clicky, puzzle-solvey affair, and you'll hunt for objects and clues under the watchful eyes of a whole host of creepy ghost kids. (Is there any other kind?) While the "skip" button on puzzles takes a long time to charge, the game's "hint" button is extremely helpful and will even point you exactly where you need to go if you click on it during normal gameplay. As such, you might want to resist the temptation to use it unless you want the experience to feel like you're being lead around by the hand by a fussy, over-protective mother. "Did you tie your shoes? Are you sure you have all the puzzle pieces you need to open the infernal gate to the Hellmouth? Make sure you take a tinkle before you go... you don't want to have to turn back!" *sigh* Yes, moooooooom... 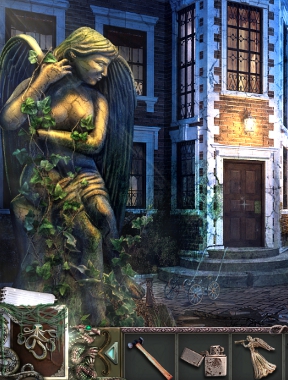 Analysis: Insomniac is vastly superior to Shadow Town in nearly every way. Sporting significantly flashier visuals, cutscenes, and even a bit of voice acting, Insomniac is not only presented beautifully but plays great too. Strange things constantly happen around you, clues and scenes drive the plot forward, and the hidden-object scenes are clean and well-rendered so you never feel like you're straining your eyes. The downside is there's a fair amount of backtracking, and the game is more than happy to make you repeat some hidden-object scenes in a relatively short window of time. Fortunately, Insomniac really works to keep you interested and rarely lets more than a few minutes pass without something strange and spooky happening, or the plot advancing in some fashion. You might not call it scary unless you're the sort of person who generally jumps at shadows, but it definitely isn't boring. Having finished Shadow Town isn't necessary a strict requirement to enjoy the game, but there are so many nods and mentions and answers directed at it that a lot of the plot might go right over your head otherwise.

The game's biggest flaws, however, might be both that the hint system makes the game extremely easy if you rely on it, and that even if you've played Shadow Town the plot is sort of confusing. Don't get the wrong impression; if you're looking for an eye-catching, surreal hidden-object adventure then Insomniac is a great choice for a relaxed evening's play, but as you're bombared with strange images and cryptic notes you'll probably be doing your own version of an adorable YouTube pug-head-tilt video more than once. On the other hand, this strangeness works in the game's favour to a certain degree, since you're always driven to find out more about what's going on, and if a purple skeleton or a creepy shadow pops up once in a while as you're doing so, all the better. Twisted Lands: Insomniac isn't quite perfect, but it's a game you can have a lot of fun with, packed full of surprises and weirdness. You can probably expect a playthrough to last over four hours, and if you've been wanting a not-too-spooky but definitely ambitious and well made title to lose an evening in, you'll definitely want to check out the demo.

A Collector's Edition is also available. It contains a bonus chapter to play, wallpapers, strategy guide, and more. Remember that Big Fish Game Club Members pay only $13.99 for Collector's Editions (or 2 club credits), and collector's editions count 3 card punches of 6 total needed for a free game.

Inside the Vent Shaft

Return to the 2nd floor hallway, then go right to the study.

Inside the Vent Shaft

Return to the 2nd floor hallway, then go right to the study.

This was, generally speaking, a well put together game which I liked the look of within the first couple of minutes of play. I felt that (surprise, surprise), it was a little light on HOGs. Normally I feel there are too many. In Twisted Lands: Insomniac we were taken back too quickly to previously explored scenes on another object hunt, and objects were maybe just a little too obvious.
I loved the inbuilt strategy guide, because I am one of those people who just get frustrated and lose interest if the answer doesn't become clear within a very few minutes. There was one point though when I had to visit Jayisgames to discover something the guide did not clarify. Needless to say Jayisgames had the answer for me. Up until then I had thought I had maybe hit a bug and had even gone to the length of beginning the game again.
The bonus chapter is, as is unfortunately so often the case, a waste of time and money. Don't go for the Collector's Edition. It was apparent from moment one that it had been put together hurriedly with no real commitment to making it challenging or interesting.
Points out of ten? A good 8 I would say.

If you haven't played yet - don't read this.
I enjoyed the game but right at the end when Angel is talking to herself in the red dress I missed the conversation as someone was talking to me and can't work out the conclusion, why there were two of them. If anyone can help me out I'd be grateful. Thanks
Jojo

help! in the cache on the 3rd floor of lighthouse i only got the numbers 4152, can't figure out how to open the darn thing. hope someone can help me.

Refer to the Chapter 3 section of the Walkthrough above the comments for the solution to that puzzle.

went back, but nothing! went clockwise, counterclockwise, is there a trick to entering the code?