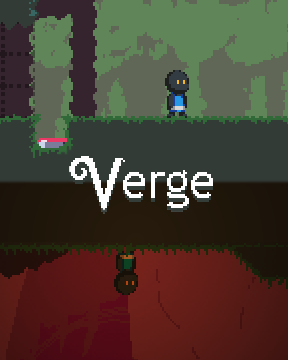 Verge is a puzzle platformer originally developed by Kyle Pulver (maker of Depict1) for a TIGSource game competition, and now ported to flash by Kristian Macanga. Its tone can best be described with the HP Lovecraft quote that was the game's inspiration: Life and Death - Death - its desolation and horror- bleak spaces - sea - bottom - dead cities. But Life - the greater horror! Vast unheard - of reptiles and leviathans - hideous beasts of prehistoric jungle - rank slimy vegetation - evil instincts of primal man - Life is more horrible than death. Contemplating the twin opposing horrors of life and death is a haunting, challenging concept, and thus it should be no surprise that it makes for a haunting, challenging game... one where death and rebirth is the only way to progress.

Move with the [arrow] or [WASD] keys, and jump with [Z] or [spacebar]. Your goal is to make it to the door at the end of each level. You might think that you should avoid those enemies and spikes walking around... and you'd be wrong, since that's often the only way to progress. This will send you to the underworld where you'll have to avoid some truly dangerous demons (or shake them off with button-mashing), until you can make it to a resurrection point denoted by an ankh. There are switches to activate and upon which to place boxes, the momentum of gravity to consider, and fairies to collect. The only question that remains is, well, "To Be Or Not To Be?"

Those who played the original downloadable version might be a little disappointed that this is well and truly a port rather than an expansion. Oh sure, gameplay is refined, and there's a couple extra story bits here, an alternate ending there, but by and large it's the game that it was when in .exe form. Of course, those encountering it for the first time should know that this is not a bad thing: Verge is quite the inspired work. Travel between light and dark worlds has been seen in games as diverse as Legend of Zelda: A Link To The Past, Trilby's Notes, and Eversion, but it's never been so confronting a mechanic as it is here. Things feel a little morbid at times, with the constant suicide and resurrection, but never so much so that it overwhelms the clever level design and sedate-but-effective special effects. It's not a game that takes time to explain its mechanics, which may be frustrating to those who don't like having to infer what the game wants them to do. Also, difficulty ramps up a couple of levels in, so you may have to have a high tolerance for block-and-switch puzzles to make it to the surprisingly emotional conclusion. That said, Verge is a highly unique game that the downloading-averse should definitely take the chance to experience now.

Interesting game. It really disappointed me that I couldn't play it when it was first released, since I had a Mac, but the rerelease for the browser really perked me up.

There were ten "Lines" visible via the secret badges on Newgrounds, and they apparently add more story. To get each one, find the fairy in the corresponding level. Here they are:

...this vivid trance consumes me...

...and sets my spirit free.

I think they make more sense once you've seen the "good" ending.

There are two endings, actually

Play through the game normally

Collect all the fairies, use them to climb up(down?) in the underworld in the last level.

There's one in each level

Even the first level, where the only way to die is to let the one enemy kill you

aarrgh...it's lagging so badly that I can't even jump on a simple platform. broken for me unfortunately...it looked like it had potential. (btw - latest Chrome and Flash on W7, no other tabs open)

I got two endings,

walking to the angel in the graveyard

and climbing up a huge set of stairs in the last(?) level. I definitely didn't get all the fairies, although there were a lot of fairies during the climb, and I don't remember climbing anywhere in the underworld other than swinging up and down through the barrier.

Meep, this freaks me out! The demons in the underworld scare me.

I'm stuck. It's the level where

you can dive unimpeded into the underworld, although you need to die in order to get to a tall spot under a dragon, because that's where the red button is that will remove some blue blocks that are in the way of a yellow block that has to get moved ... somewhere.

I'm stuck there too, but I noticed the block goes on top of this hill near the start.

The control are too picky and jumping upside down was just frustrating. Actually jumping in general was frustrating. Miss the monster by a pixel and you get killed. And how on earth are you suppose to shake off those white monsters!

I also found the two endings:

Playing the game without collecting the fairies:

One of the endings is when you find the graveyard level.

Collecting all the fairies & the "hidden level" when you are at the graveyard level:

If you think the graveyard level is the last level. Well, there is an ankh teleportation to use that will take you to a "hidden level".

Too bad we can't replay only single levels to get the butterflies for the second ending. I miss the first, and I don't want to go trough the whole game a second time just for it.

Is the original version different, because I got the bad ending, but I did not that.

The angle was at the end instead of the door, the screen went white for awhile with ocean sounds after I came to him, then the time came up, then the text "return to me". I wanna see the good ending, but I don't feel like playing through the game and getting all the butterflies again.

Hey ray9a, I am stuck in the same place. Losing interest in this game fast.

I don't understand the story nor the identity of that angel

Mind someone shed some light on the story?

Hmm ... maybe it's just my browser (latest Chrome) but over half my game is cut off by black bars on either side ... anyone else having this problem? In general it's a little slow (slightly too frustrating to be truly enjoyable) but it certainly looked interesting!

[Be sure your browser isn't zoomed. Press CTRL-0 (zero) to reset it. If that doesn't help, make sure your Flash Player is updated. -Jay]