After half a dozen sequels and spin-offs, we still don't know where all that water has gone. We do know how to move it around, though, which is what Disney Mobile's brand new physics puzzle game is all about! Where's My Water? 2 brings Swampy, Allie and Cranky back for more dirt digging and ducky finding, adding an ocean of challenges, items and additions to this free to play sequel. 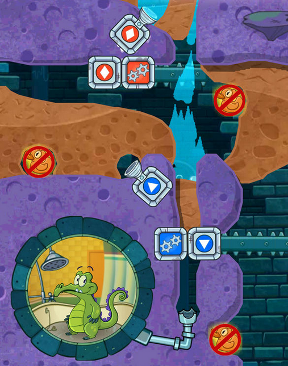 The gameplay in Where's My Water? 2 is the same as the games that came before it. Each level presents you with Swampy's bathtub at the bottom of the screen, with water pockets trapped above. Between you and Swampy's shower are solid rocks, movable blocks, levers, switches, spouts and most importantly, removable dirt. Simply trace your finger along the screen to create a path for the water to travel. Get it all to Swampy to complete the stage, conserving every drop you can along the way!

Gameplay is structured a little differently in Where's My Water? 2. You now have a map of sorts to travel through, unlocking stages by collecting a certain number of duckies in each level. You also gain access to special challenge stages that do crazy things like turn the world upside-down or force you not to collect ducks. These add a nice change of pace to the series formula, though they do end up feeling like they were thrown in there just to justify the duck-based level locking system. 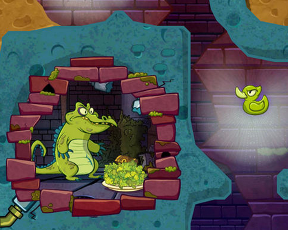 Analysis: While the gameplay of Where's My Water? 2 remains mostly unchanged, the sequel goes down the dark path of freemium monetization in several unfavorable ways. For starters, there's energy to worry about. Just like those cash-in Facebook games, you're limited to the number of things you can do by an energy bar that depletes each time you play a level. You gain more over time, but it's always there threatening to end your fun just when you're starting to get into it. An expensive in-app purchase permanently increases the bar's size, but once you see the price you'll run away in terror.

It's a bit of a disappointment to see an imaginative and successful series like this go down the path of "everybody's doin' it so we are too". The design went from a pleasant level of creativity to a rubber stamp copy of every other mobile game out there, adopting many of the features that suck the life out of otherwise fantastic games. The items it added are fun but completely unnecessary, shoved in there as an excuse to monetize the product. It's a similar situation as the Plants vs. Zombies sequel selling out, though Where's My Water? 2 doesn't commit the crime quite as harshly.

If you don't mind dealing with an aggressively monetized (and Facebook integrated) game, Where's My Water? 2 still provides a lot of entertainment. It's a free download and gives you quite a lot of things to do without spending any money. Plenty of unique challenges, lots of things to collect, and more alligators than your average swamp party. That's a good thing, by the way.

Maybe it's just me, but the gameplay just doesn't feel the same as it used to. It feels a little empty. To think they stopped making levels for Where's My Water for this.

I love this whole series of games (Where's my Water/Perry/Mickey -- all essentially the same game). They have a track record of regularly adding new levels, which is cool. Over the last couple years they've added a ton a new levels for free, which is even cooler. I wasn't really surprised when they expanded the game with in-app purchases to unlock Cranky and whats-her-name. And I didn't mind paying to unlock them.

From the 10-15 minutes I was able to play the game before my energy bar ran out I really enjoyed it. I wouldn't hesitate to purchase a complete game if they decide to put it on the app store, but I'm never going to pay for an energy bar refill, nor a larger energy bar.

It's a shame that other gamers are willing to go along with this sort of nonsense, because as long as enough people buy it, Disney doesn't care if some of us won't.

It is definitely a case of "vote with your wallet" and unfortunately those of us who are willing to do so and NOT pay to play are becoming the minority. To be honest, I have no problem with games like this existing and people wanting to play them, but it's the way they're so often poorly balanced in terms of play vs payout, and the way they've begun to creep into every single game out there, that I don't like.

I'd prefer the option to pay a flat fee and be able to play without restrictions, but that rarely happens because companies prefer to be able to charge you over and over. It's getting to the point where just ignoring it isn't an option because it's getting so prevalent that so many developers are turning to it as a viable business model.

I loved the first game more than breakfast, but I deleted this one as soon as I realized it had gone down the dark path of wait-gaming. Sell me level packs, sell me expansions, but don't sell me the ability to play the game.

What really bothers me is how IAP systems often break gameplay. Instead of adding things because they enhance the experience or provide challenge, they're there to make people want to spend money. You can't do anything original if your main design philosophy is "have microtransactions all over the place".

The sad thing is most outlets and app store reviews will rank this high, just like Plants vs. Zombies 2. Looks like we're stuck putting up with it. Here's rooting for the indie scene! :-)

3,206 Views
2 Comments
chrpa— Jayisgames needs your help to continue providing quality content. Click for details Hi, Retro Weekend Escape is here! In this week's games you leave the escape room in a rather unusual way twice. In Vitamin Hana's game a drone...  ...

3,080 Views
2 Comments
chrpa— Jayisgames needs your help to continue providing quality content. Click for details For the end of the summer Rinnogogo created a thematic game, a bit nostalgic, but sweet and fragile as their other games. The end of a vacation...  ...